Is it Curtains for the BOD5 test?

Well the answer is no (for now) as the BOD5 assay is enshrined in global environmental policy in most countries. However, we all know that the BOD5 test is prone to error which accumulates across the various stages of the sampling process leading to final measurement uncertainty often exceeding 30%. Until now nobody has really been able to prove how inaccurate it is; to do so would need a highly accurate and repeatable technology. Although widely used in the water and environmental protection industries, the inherent inaccuracies, time delays and disadvantages of this technique make it unsuitable for process measurement and control. Furthermore, it even becomes difficult and problematic to calibrate in-situ instrumentation.

The Proteus, a patented, highly accurate fluorescence measurement water quality monitoring platform has been used to measure BOD & COD in real-time and to highlight the high uncertainty (>30 %) in the widely accepted BOD5 measurement process of final effluent at a UK wastewater treatment works using multiple replicates across several laboratories. Parallel measurements taken with the Proteus were more repeatable than the equivalent 5-day laboratory test. Furthermore, the individual sample runs did not correlate with the Proteus, but the Proteus provided a very strong correlation with the mean of the replicate laboratory samples.

This new ability to gain accurate BOD5 readings has truly global implications for traditional BOD5 sampling and hence a new dawn for using the measurement for monitoring the efficiency of treatment works, our environment and drinking water resources. The Proteus can therefore provide a more reliable indication of ‘true’ BOD5 and thus highlights the potential of real-time BOD monitoring for both process optimisation and ensuring compliance.

The Proteus highlights uncertainty in the BOD5 test

The 5-day biochemical oxygen demand (BOD5) test is a standard bioassay used to quantify the dissolved oxygen required for microbes to consume the organic matter present in a water sample. BOD5 is widely used an indicator of organic pollution and is a key parameter in large scale inter-governmental monitoring (e.g. European Water Frame Work Directive) of chemical ‘quality’ in natural freshwater systems. In the water industry, particularly wastewater treatment, BOD5 is used as an indicator of the reactive organic load and can potentially provide important inputs to process control algorithms such as optimisation of aeration. However, due to the delay between sample collection and results being available (5-day test period), BOD5 cannot be used in a process control context. In addition, the BOD5 sampling and laboratory protocol, though relatively simple, is prone to errors at various stages of the process and quantification is associated with considerable uncertainty (> 30% in many cases; Figure 1).

Recent advances in optical technology have facilitated the development of fluorescence based sensors for monitoring dissolved organic matter in-situ, in particular sensors focused on the tryptophan like fluorescence peak (Figure 2). The Proteus BOD is a patent pending fluorescence based system for monitoring reactive dissolved organic matter with high accuracy and repeatability. The sensor provides a robust BOD5 and COD (Chemical Oxygen Demand) surrogate, unlike other parameters used to indicate BOD5 such as dissolved oxygen (a response to breakdown of elevated organic load), turbidity (unable to differentiate between organic and inorganic particles) and absorbance (measure of all organic pool: i.e. reactive and non-reactive). 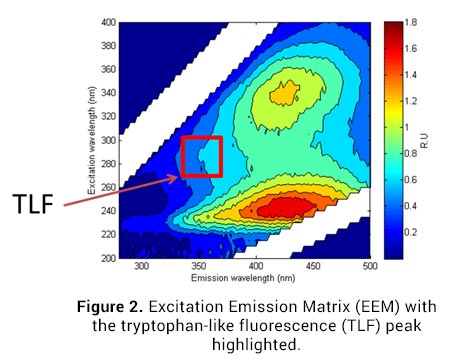 This can be interpreted as a map of optical space with specific peaks of fluorescence intensity associated with dissolved organic matter (DOM) of a specific molecular structure.

The Proteus targets the protein-like material that dominate the DOM contributing to BOD5 at wastewater treatment plants. The Proteus BOD is embedded with a standard calibration which can be optimised for the specific monitoring site (treatment works) through collection of parallel samples and subsequent laboratory quantification of BOD5, however the uncertainty identified in Figure 1 can introduce errors, causing problems for monitoring accuracy. In this technical note we highlight the uncertainty in the BOD5 and provide recommendations for sampling and calibration of optical sensors for real-time BOD monitoring.

The goal when deploying any field based sensor is to get as close as possible (or better) to laboratory measurements of the parameter of interest (in this case BOD5). For this study the Proteus was installed in the final effluent channel at a medium sized treatment works (p.e. ~50,000). An initial calibration was carried out over a 48h period. Samples were collected every hour using an auto-sampler and subsequently transported to a UKAS accredited laboratory for BOD analysis. However, due to erratic laboratory data (which is quite common) a second, more robust calibration was conducted. For this, bulk parallel samples (n = 6, volume = 4 L) were collected and split into 4 sub-samples for BOD5 and COD analysis. These samples were collected directly adjacent to the sensor and analysis undertaken at two UKAS accredited laboratories. At one of the laboratories 3 replicates of each sample were analysed. In addition, before shipping to the labs a measurement was made using the Proteus to enable direct comparison. All samples were transported on ice (< 5 °C) and analysed within 24h of collection.

For the first calibration period there was no clear relationship between the laboratory measurements and the in-situ measurements and the laboratory data were highly erratic suggesting swings of > 5 mg/l between readings separated by an hour. During the focused calibration period, 6 samples were collected and replicate laboratory measurements of BOD were completed. This highlighted marked variability in the BOD between laboratories and within a single laboratory (Figure 3). When considering all the laboratories BOD the standard deviation, SD, ranged from 0.4 mg/l – 1.28 mg/l and the associated coefficient of variation (CV; ratio of the standard deviation to the mean expressed as percentage) ranged from 12.5% - 53.0%. When considering within laboratory uncertainty the SD range from 0.57 mg L – 1.53 mg L and CV from 21.7% - 57.3%, this has clear implications for monitoring low concentrations at final effluents and for calibration of in-situ sensors for BOD monitoring. When attempting to calibrate the Proteus against a single set of samples (i.e. from a single lab or replicate number), the problem with laboratory uncertainty is clear with no significant calibration achieved (Figure 4). When a mean of all laboratory BOD samples was assessed a strong linear relationship between the Proteus and the laboratory data was observed (Figure 5). This equated to a minimal quantification error for the Proteus BOD (Mean error = 0.07 mg/l; Figure 6). 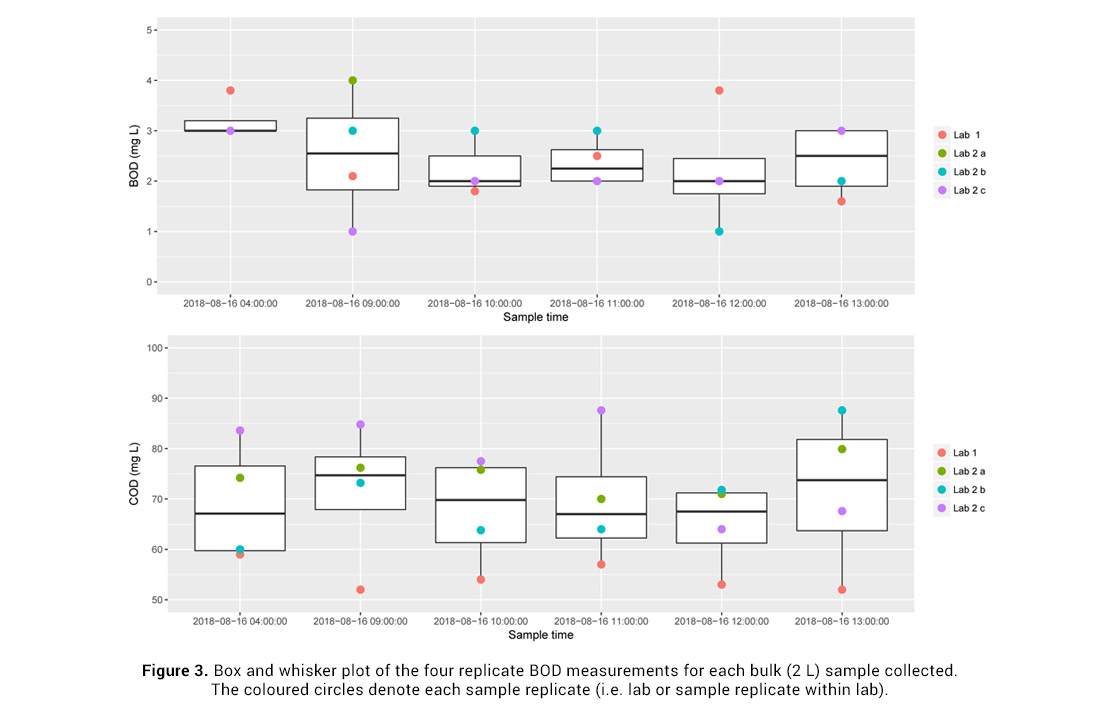 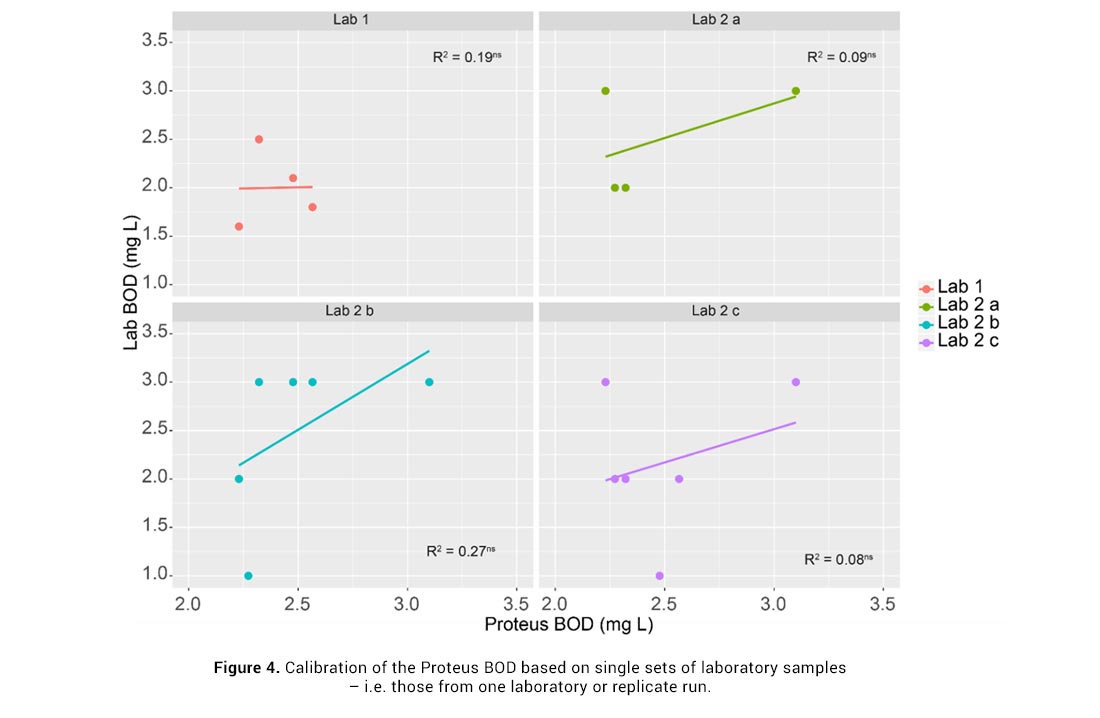 In this initial study of BOD monitoring of final effluent using the Proteus we highlight significant uncertainty in the laboratory quantification of BOD. This was apparent when considering both, between laboratory and within laboratory variability with coefficients of variation > 50%. Hence, this has major implications for monitoring efficiency of WWTW and severely limits potential for process optimisation. It is clear-cut that the Proteus can provide a more reliable indication of ‘true’ BOD values as strong correlations between the mean BOD of all the laboratory replicate samples and the Proteus were apparent. This highlights the potential of real-time BOD monitoring using the Proteus for both process optimisation and ensuring compliance.