COP26 Water is Climate; A global call to action? 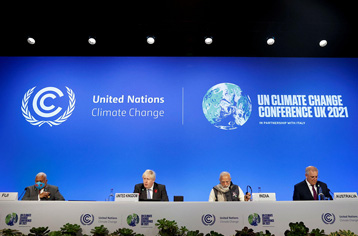 Climate change is a phrase often bandied around almost recklessly in political arenas; an effort in grabbing attention then followed by a mediocre policy akin to sticking a plaster over a gaping wound. However, in Glasgow this November, the United Nations Climate Change Conference of the Parties was held with the aim to accelerate movement toward achieving the goals set by the Paris Agreement (2015) and the UN Framework Convention on Climate Change (1994).

While it's fair to say expectations are generally low when large numbers of stakeholders and policy makers have to achieve a productive consensus, this conference has always held a global significance as the effects of climate change can only be combatted through a united and inter-disciplinary effort. Indeed, climate change is a multi-faceted issue and therefore the solutions are far from simple, and water has a central role with many climate-associated challenges facing every single nation.

'Water is Climate' has been a discussion underway all year in the build-up to the event in Glasgow, where the first ever Water Pavilion has been hosted to unite the global water community with the aim to provide cutting-edge advice, backed by science, to decision makers. The discussions covered a wide range of topics including treatment efficiency, net-zero carbon emissions by 2030 and how to apply mitigative actions on a global scale. Affordability and finance have taken a main role in many of the discussions as the sense in taking early action in the form of sustainable, cost-effective solutions has been recognised. The water sector on its own can cut 10% of global greenhouse gas emissions, helping to secure the pathway to limit warming of global temperatures to 1.5 degrees. Technology such as Proteus is key in helping achieving these aims, alongside the innovation of more efficient infrastructure in helping treat water worldwide. Simply using Proteus for feed forward aeration control within the wastewater treatment process could reduce global energy consumption by 1%.

The Water and Climate coalition, a new group formed in April 2021 based on uniting the climate and water issues where so often they are treated as separate, held a programme of events focusing on adaptation and resilience to the water-based issues which are already affecting so many people. One of the more startling motivations of the Water and Climate coalition is the fact that of the 187 member states and 7 member territories of the WMO, 60% of them are reporting reduced hydrological monitoring capabilities. This turbulent period of climate induced changes is arguably when we need more data than perhaps ever before to make sense of the changing world around us.

There has been a new call to action from the members of the High Level Panel for Sustainable Ocean Economy (The Ocean Panel), attempting to encourage other countries to join them in their target of managing 100% of their national waters sustainably. Despite the addition of the United States of America to the Ocean Panel at COP26, it still leaves them with a mere 14 members. While the USA might bring more leverage to the table as a large political power, the ocean has no concept of 'national' borders and for sustainable management surely a much larger cooperative effort is required in the rather immediate future? It is not to downplay the important of panels such as this, indeed the work and research they do can be instrumental in increasing understanding and spreading knowledge however, it feels at this late stage, there should be a much wider effort.

However, looking at the headlines since the conclusion of COP26, statements about water are conspicuously absent; the exceptions being the 'watering down' of fossil fuel reduction commitments. The majority of the reported outcomes focus on the net zero commitments, or lack thereof, deforestation and climate adaptation, all important issues but only a snapshot of a much larger picture. While water was undeniably a large part of COP26 with the Water Pavilion, in terms of tangible outcomes there is not much that has been reported.

Looking at the Present and the Future

Water resilience builds socio-economic resilience. As of 2020, 1 in 4 people still do not have access to clean and safe water worldwide; an astonishing statistic given that the newsletter author has a smart speaker in their flat that is capable of sending a reminder to their phone to pick up the milk when walking past their preferred supermarket. That being said, breakthrough technologies such as Proteus form an important part of the mitigation of climate issues allowing us to understand more about the issue and therefore inform further on the solution. Innovative technologies alongside inter-governmental co-operation, responsibility of big corporations, small businesses and of course the individual are all required to combat climate change.

Going forward, COP26 is very much a small cog in a large machine. Some ground has been gained at this conference but much remains untouched. Achieving agreement between nations and other stakeholders who all have their own priorities and situational context is tough but the time for change is already upon us. Not too many years ago, 1.5 degree warming was the 'unthinkable' scenario, now it is a reality and best case. Failure to act is simply no longer an option.

Find out more about the Water and Climate coalition here.

Find out more about the Ocean Panel here.